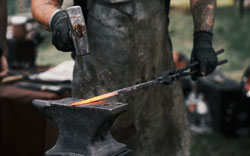 It’s always a good idea to do some research on steels, especially as a consumer looking for a particular type of knife. After all, the steel used for the blade defines the knife and dictates how it will be used. However, you may stray from steels that are good for knives somehow end up with steels that aren’t meant for knives at all. One such steel alloy is the T1 steel. It’s good for a lot of tools and structural components—but it’s not really meant for knives at all.

This guide should answer all your questions regarding T1 steel, and whether it works as a knife blade steel. you’ll find answers to commonly asked questions, and even delve deep into its chemical composition. the guide will even compare it directly to other similar steels as well.

What is T1 Steel? 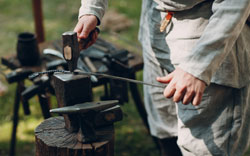 The T1 steel is generally regarded as a tool steel, meaning it’s a good steel to use for manufacturing tools. But it’s also known as a high-speed tool steel. This means that it’s extremely resistant to abrasion or damage when cutting at high speeds. This is why it can be used for electrical saws.

It’s also quite a popular option in construction. In its steel plate form, the T1 steel is noted for its notable strength and impact resistance. It’s actually 3 times as strong as regular carbon steel. It remains strong even when in low (or even subzero) temperatures. It also has a somewhat higher corrosion resistance than regular carbon steel, though of course it’s not quite stainless steel.

You may find T1 steel used for the following:

The T1 steel plate is also used for the following:

While some alloys only have a few elements, with T1 steel you have many different elements added to the iron. Here’s the standard chemical composition of T1 steel:

Carbon, 0.65% to 0.8%: This is quite a lot of carbon, which accounts for the high hardness level and strength you can get with T1 steel. The carbon also accounts for its hardenability, or its reaction to heat treatment.

Tungsten, 17.25% to 18.75%: That’s a lot of tungsten, obviously, and it’s the main element that makes the T1 steel a high-speed tool steel. After heat treatment, the T1 steel can maintain its temperature even in high temperatures due to the tungsten content.

Manganese, 0.1% to 0.4%: That’s not much manganese, but it does reduce the chances of ending up with brittle stee. It also helps a bit with the tensile strength and hardenability of the steel. The manganese also reduces the unwanted sulfur content, and also takes out the oxygen from the molten steel.

Chromium, 3.75% to 4%: Here, it helps to boost the yield strength and the hardenability of the steel. It also helps a bit with corrosion resistance, in stark contrast to many carbon steels that don’t contain any chromium at all. But it doesn’t quite match the minimum 10% to 12% chromium content in stainless steel.

Silicon, 0.2% to 0.4%: This is a common amount of silicon found in alloy steels, because you don’t want too much silicon at all. Silicon in larger amounts tend to reduce ductility, and that can make steel more prone to cracking. That’s why the silicon levels in most steels don’t exceed 0.4%.

But in smaller amounts like in this case, silicon can be quite helpful. It helps with improving the strength and hardness of the steel.

Nickel, 0.3%: This also helps with corrosion resistance, and boosts hardenability too. The nickel improves the fracture toughness, which helps explain why the T1 steel is great at low temperatures.

Vanadium, 0.9% to 1.3%: The vanadium works similarly to carbon and manganese. It helps in many areas: wear resistance, fatigue stress resistance, fracture toughness, resistance to shock loading, and hardenability.

Copper, 0.25%: Like chromium and nickel, this helps with corrosion resistance, with some minor assistance for hardenability.

Sulfur, 0.03%: It’s good that there’s only a tiny amount of sulfur, because in larger amounts the sulfur can reduce impact properties considerably. But with this tiny amount, it helps with hardenability and machinability.

Phosphorus, 0.03%: Like sulfur, phosphorus is normally regarded as an unwanted impurity in steel alloys. Phosphorus in small amounts also improves machinability and also boosts the tensile strength of the steel.

Yes, it’s true that the T1 steel can be quite hard. In fact, it can reach a hardness level 63 to 65 HRC. That’s very hard indeed, as average knives tend to have a hardness rating of about 52 to 55 HRC, with the better knives reaching up to 58 HRC or so.

But that comes at a price when it comes to toughness. In general, very hard steel alloys are cursed with low toughness levels. That means that the steel can chip off very easily.

Yes, it does. With its 4% maximum chromium content, it doesn’t qualify as a stainless steel at all. However, some T1 steel plates have been treated to offer decent corrosion resistance in atmospheric conditions.

In other words, you don’t really want the T1 steel to get wet and unattended. That’s why it’s mainly used for situations where it doesn’t get wet at all. 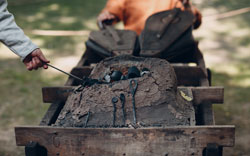 This is a list of the expected characteristics of T1 steel:

While it doesn’t match the stainless steels in this regard, it does offer some level of corrosion resistance that you may not find in low alloy carbon steels.

While the T1 steel only offers fair performance for machining and grind (and poor forming), it’s great when you have to weld it. 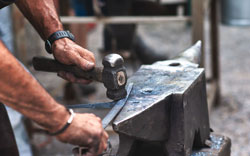 T1 steel can be bought in various supply forms, including round bars, squares, and sheets. But it’s quite popular as a steel plate. Now we compare the T1 steel to other popular options for steel plates.

The AR400 steel is more known as an abrasion-resistant steel, while the T1 steel is regarded as a structural steel. The T1 steel offers great weldability and excellent strength, especially in below-zero temperatures. The AR400 is also quite hard and strong, but it’s highly regarded for its resistance to both corrosion and impact abrasion.

The AR500 is even more formidable than the AR400 when it comes to abrasion resistance. Its resistance to wear is astonishing, as it resists heavy wear, slide wear, and rub wear. It can also deal with high impact stress regardless of the temperature. In these terms, the AR500 is better than the T1.

Both the T1 and A36 steel alloys are considered structural steels. The T1 is slightly harder, and it elongates more before breaking. However, the A36 steel offers greater tensile strength, and fatigue strength. The A36 is quite popular when building oil rigs, bridges, and buildings.

The two terms refer to the same alloy, so there’s no difference between the two. They’re both the same steel. the A514 is simply the ASTM (American Society for Testing Materials) designation.

Is T1 Steel Good for Knives?

No, it’s not really good for knives at all. The main problem with the T1 steel is its low toughness level. It chips off very easily, and that’s a huge problem.

Technically, you can use it for knives. You just have to use it as a very delicate chopper. You even use it in any chopping manner, and it will chip off. You can’t use it for a blade as even the slightest prying use may chip off the steel too.

There are actually plenty of good steels for knives, ranging from super steels to budget options that offer adequate cutting performance every now and then. Some tool steels also work well enough for knives, but the T1 tool steel isn’t one of them. It just isn’t tough enough, and the slightest mistake can lead to your knife chipping off.

Sure, if you have a factory and in the business of manufacturing industrial components, you’ll find T1 steel useful. But as an ordinary consumer and a potential customer looking for a good knife, the T1 isn’t for you. You’ll have to look at other steels, but at least you have lots of other steel alloy options available!