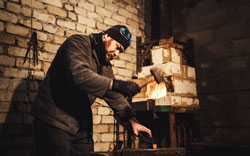 A lot of modern steel grades are enhancements of the most popular classics in the market. With modern technology, it’s really possible to take some great steels up a notch so users can get more out of them.

The 425M steel is one great example of such steel grades, designed to enhance one of the most popular steel grades in the market. The idea is that by creating a better option that’s still similar to the popular option, people will have more choices to choose from.

To know more about this alloy, let this 425M steel review give you the details below. 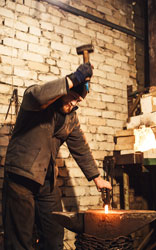 Like with other affordable steel grades, there are lots of varying opinions about the 425M steel. Many, especially budding metallurgists and knife enthusiasts, might find themselves confused about these so it’s best to get a bit technical about this steel grade.

The 425M steel is defined as a medium-high carbon stainless steel from the 400 steel series. Its name gives out what it really is for those who are familiar with steel names. The number 25 and the letter ‘M’ indicate that it’s a newer version of the 420 steel. The M stands for modified.

From this, it’s easier to tell that the 425M was designed to serve as an improved version of the widely popular 420 steel. Its composition also suggests this fact as a lot of the 425M’s components are higher in amounts and balanced out to enhance certain attributes.

Some of the improvements the 425M steel has to offer include better resistance to stain and corrosion and improved toughness. These are some of the reasons why many think it offers great value for the money as it can offer a performance that’s not expected for its price range.

Since the 425M steel is designed to be a better performer than the 420, it can be assumed that it’s also meant for the same tasks as its predecessor. Here are a few, however, that it’s commonly used for:

As an improvement to the 420 steel, there will be a number of similarities and differences in the composition of the 425M steel. There are also a few key additions like the vanadium and molybdenum.

Carbon, 0.40 – 0.54%: 425M’s carbon content sits at the threshold of mid to high levels of carbon. It’s not much but it already offers a good amount of strength and hardness in the steel. It also improves hardenability, allowing the 425M to be tempered to improve its hardness level.

Chromium, 13.50 – 15%: What makes the 425M a notable stainless steel grade is its high chromium content. This amount already gives it a great deal of protection against rust and corrosion. It also helps harden the steel and add more toughness to it.

Molybdenum, 0.60 – 1%: One thing that makes the 425M different from the 420 is its molybdenum content. It has the same effects as chromium, adds corrosion resistance, toughness, and hardness to steel. It also increases the steel’s tensile strength and hardenability.

Vanadium, 0.10%: Another notable addition to the 425M is vanadium. Often used in super steels, this element can help control the grain size of the steel which helps in improving its yield strength and formability. It also improves the ductility, hardness, and corrosion resistance of steel.

Manganese, 0.50%: As a deoxidizer and desulfurizer, manganese is mostly used as a cleaning agent in steel blends. However, it can also increase the strength, hardness, and hardenability of a steel. It also bolsters a steel grade’s resistance to abrasion.
Silicon, 0.80%: Another deoxidizer in steels is silicon. For the 425M, it also helps improve its corrosion resistance.
Phosphorus, 0.04%: It’s not ideal to have high amounts of phosphorus in steel but at this amount, it’s relatively safe and can add strength and hardness to the mix.
Sulfur, 0.03%: This is another impurity in most cases but with its miniscule amount, it’s added or allowed to make the 425M more machinable.

Lots of users do not think that the 425M is hard enough for their requirements but according to its numbers, it has a Rockwell rating of 57-60 HRc. This means that it can already keep up with some heavy and rough use.

No, the 425M steel is not susceptible to corrosion, stain, and rust. It’s noted for its great corrosion resistance, in fact. This is one of the areas that was enhanced in the creation of the 425M, so it can be definitively said that the 425M doesn’t get rusty. 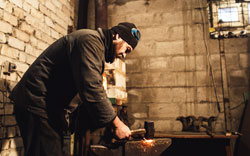 What are the things to look forward to in 425M steel? Here are its key properties to take note of:

With its high amounts of chromium, some molybdenum, and silicon, the 425M is a bit more resistant to corrosion and rust compared to its predecessor, the 420 steel. Some also say that it can handle being wet for a long time without any staining or rusting at the end. This makes it very promising for those who are looking for knives they can use in wet conditions.

As mentioned above, the 425M can reach a hardness level of 60 HRc. This is a significantly high level of hardness, especially for a low-end blade steel. This means that it won’t easily get punctured and get abrasive or adhesive damage.

With its high hardness also comes good edge retention, so it can be expected that the 425M steel can hold an edge for quite a bit. It can also get a very nice edge, thanks to its vanadium content.

The 425M is also noted for its high strength and toughness. Despite not being a high-end blade steel, it’s still very durable and can handle quite a good deal of heavy use.

Some also say that the 425M is highly capable of handling abrasive damage. It won’t easily get worn out even with regular use.

The 425M is also easy to cut and work with. Despite its high level of hardness, it can be pretty ductile and malleable so knifemakers can handle it quite well. 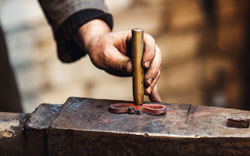 How does the 425M compare to other similar steel grades? Here are a few comparisons that might help those who are torn between this alloy and others that are virtually identical to its composition.

Considered as a high-end steel, the 440C is a high-carbon steel. It’s noted for its great corrosion resistance and high hardness level. It’s also not that pricey so many knife aficionados are big fans of it.

Compared to the 425M, the 440C is known to hold an edge for much longer. However, it’s more difficult to sharpen due to its high hardness.

The 420HC is another modification of the 420 steel so it’s also often compared to the 425M. The ‘HC’ stands for high carbon as it has .45% of this element. It’s really not that different from the 425M so lots of knife fans think that the two don’t have a lot of difference.

Even with this said, though, some still find the 420HC to be a bit more preferable possibly because of its nickel content. It offers slightly better edge retention so it’s more convenient for some to have around.

Is 425M Steel Good for Knives?

Based on its specifications and use, it can be said that the use of 425M steel for knives can be a good idea. It’s definitely hard enough to offer the functionality needed from dependable knives.

Several manufacturers also already use 425M steel for knife making. With its affordability and good attributes, it already suits the requirements of many knife users.

However, the best 425M steel knives also have superb heat treatment. Not all knives in this steel are made equal. This is why it’s best to be particular about the make of a specific 425M steel knife to ensure the best performance.

Got questions or additional input to this review? Sound off in the comments!