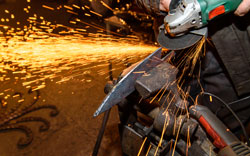 It’s fascinating how many amazing steel grades were developed after it was discovered that adding more carbon to iron creates steel. Over the centuries, lots of exciting varieties that can suit all sorts of various requirements have been produced. However, not all of them are as groundbreaking as the SM100 steel.

Deemed to be as revolutionary as steel itself, the SM100 is something that might tickle the fancy of aspiring metallurgists, knife nuts, and knifemakers. This alloy isn’t made of the same materials used in creating other steel grades so it can be very different from what most folks are used to.

If there’s one thing everyone will agree about the SM100 steel, it’s the fact that it’s very interesting. First of all, it’s not a run-of-the-mill steel grade since it doesn’t have the same components as most varieties.

It’s defined as an alloy made up of 40% titanium and 60% nickel and nothing else. It’s hardenable so even if it doesn’t contain carbon, it can still function as a blade steel. Many custom knife makers consider it to be a whole different category of knife materials.

SM100 also goes by the name NiTiNol. This moniker is a combination of its composition ‘Ni’ for nickel, ‘Ti’ for titanium, and Nol for the group of scientists that discovered it, the Naval Ordnance Laboratory. That was in 1959 by Frederic Wang and William Buehler.

SM100 was discovered while Wang and Buehler were looking for a super-elastic alloy that they can use to make missile nose cones. They needed something that will be pliable to extreme heat but will still return to its original form after cooling. These were so they could use it for dismantling magnetic mines.

However, the material proved to be very difficult to process and machine so it was not continuously used after it served its original purpose. Later on, it was manufactured to be used by NASA for ball bearings as it was found to be extremely resistant to corrosion.

It was only until a few years ago that custom knife makers found the SM100 to be an amazing knife material. Strider Knives’ Duane Dwyer got curious about the material in 2005 after going on a thorough search for an alloy that won’t rust.

After continuous experimentation and testing Bono and his business partner Fred Yolton established the Summit Materials who were the initial producers of the Alloy. After a few years, they partnered with Puris, a titanium producer, to jointly manufacture the SM100 on a bigger scale.

With its long history and excellent qualities, it shouldn’t come as a surprise that the SM100 steel has a lot of uses. Some were already mentioned above but here are other examples of its usual applications:

Earlier on this SM100 steel review, it has already been mentioned that this alloy is made up of 60% nickel and 40% titanium, the same with the classic NiTiNol composition. However, it’s believed that the exact formula was tweaked a little for an improved manufacturing procedure.

Nickel, 60%: Nickel offers a wide range of desirable qualities when added to a steel. It primarily improves hardenability so the blend can actually get hard enough to suit various applications. Aside from this, it also adds toughness and ductility while also improving strength and hardness.

Titanium, 40%: The most important use of titanium is in making alloys. It adds strength and excellent corrosion resistance to the mix. And since it’s more lightweight than steel, alloys made with titanium weighs less while also being stronger and more durable.

Another thing most folks will agree about the SM100 is that it’s very hard. However, the exact ratings tend to differ. Some rate it at a range of 56-62HRc while others at 60-61HRc. There are also others that put it at 57-64HRc. These can be a bit confusing since even with very small differences, they greatly matter at these high hardness levels.

No, the SM100 steel will not rust due to its titanium content. In fact, Devanna, one of its modern explorers, says that it won’t rust even after leaving it in saltwater for 50 years. 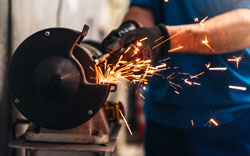 There are tons of superlatives attached to the SM100 steel’s name but does it really live up to the hype? Find out with this roundup of its attributes that are said to be capable of blowing exotic steels out of the competition.

As mentioned above, with its high titanium content, the SM100 steel is incredibly resistant to corrosion. This particular alloy is also deemed by NASA to be rustproof.

How is this possible? Titanium has a very stable inert oxide film on its surface that keeps it from corrosion.

An amazing story about the SM100 is that NASA tried to determine how much strain it can take to fail. What failed, however, is the attempts as the agency did not have a machine that’s strong enough to get the job done. While it was able to make a dent, the material exhibited superelastic behavior.

This means that this alloy is incredibly tough and strong.

Again, as noted above, it’s established that this alloy can get very hard. It will not easily shave off its material and can resist puncturing damage.

What’s important to note, however, is that this material doesn’t require additional coating or to be tempered in a special manner to achieve its hardness. It achieves its ratings from its through-thickness hardness so it’s a very organic kind of hardness.

With its great toughness and hardness, it can also be expected that the SM100 steel is capable of resisting regular wear and tear. In addition to these, however, is that manufacturers use a patented procedure that further enhances its wear resistance by creating a super-fine micrograin structure.

With its high hardness also comes its good edge retention. This blade steel can get a good edge and hold it for a long time even with hard use.

Most steel grades are magnetic in nature, mostly due to its iron content. The SM100 doesn’t have any of that element so it’s nonmagnetic. This makes it suitable for jobs that are sensitive to magnetic signatures which is why it worked well for underwater explosives work.

It’s also important to note that aside from being highly functional, the SM100 steel also makes for great looking knives. It’s possible to electrolytically color these blade steels in various hues and patterns so they can be very unique and one-of-a-kind.

Is SM100 Steel Good for Knives?

Using SM100 steel for knife making can be considered to be ideal, if the things mentioned above will be taken into consideration. This material practically ticks all of the boxes in what many knifemakers and knife aficionados look for in blade steels with a few more extras.

Since this material is also very expensive, it’s highly likely that the best SM100 steel knives are of excellent quality as well. Only expert custom knife makers try their hands on this material so there’s a good chance that the ones that will be available for sale are very reliable.

There are lots of amazing steel grades but not most of them cannot really come close to the attributes of the SM100. There are a few very similar options, however, that can be deemed as alternatives.

Manufactured by the American steel maker Crucible Industries, the NiTiNol 60 is very much similar to the SM100. It’s also composed of the same elements, nickel and titanium. It’s very likely that the two only differ in how they’re made.

With this, it can be said that it’s a tossup between the SM100 and the NiTiNol 60. Maybe it’s a matter of availability or price as both can be scarce in supply and expensive.

There are lots of superlatives that come with the SM100 steel, making it a very interesting choice of blade steel. It can certainly compete with lots of other supersteels out there and have an excellent edge with its virtually unparalleled corrosion resistance.

Has something to add about this exotic steel? Share them in the comments.