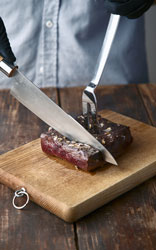 Toughness is one of the most important qualities a blade steel should have. As tools that are subjected to a wide range of uses, it needs to be able to withstand rough use. This is true for most kinds of knives.

To create a tough knife, a tough steel is needed. For this purpose, the S7 steel might be an appealing option. This tool steel is best known for its toughness so it might just suit a lot of people’s needs.

What is S7 Steel?

The S7 steel is described as a general purpose, shock resisting, tool steel. It’s noted for its versatility as it’s suitable for both hot and cold work applications. It’s also widely used for its great impact resistance, toughness, and strength.

Another contributor to the S7’s popularity is its easy machinability. It’s ready to be heat treated and is air hardening which lowers its odds of becoming distorted during the hardening process. It also will not soften at relatively high temperatures.

Similar to the other S steel grades, the hardenability of the S7 steel is also controlled by altering its composition in small amounts. Adding silicon, for starters, will make it more resistant to tempering.

With its versatility, the S7 steel has quite a number of applications. Here are a few examples of its most common uses:

Some find the composition of the S7 steel a bit surprising since it’s more for a soft steel. However, the combination still proves to be quite tough.

Carbon, 0.45-0.55%: S7’s medium carbon content gives it a good amount of hardness and strength. It also contributes to the hardenability of the blend.

Manganese, 0.20-0.80%: An essential alloying ingredient, manganese helps convert iron to steel. It also lowers the brittleness of a steel while adding strength and clears the mix of impurities like sulfur and oxygen.

Silicon, 0.20-1.00%: This element is another major deoxidizer added to steel blends to clear them of impurities. It helps improve the soundness of the structure as well as enhances its strength and hardness.

Chromium, 3.00-3.50%: In high amounts, chromium is the primary component that makes a steel resistant to rust and corrosion. In small amounts, it can’t really do the same but it can still add a good dose of hardness and hardenability to the steel.

Molybdenum, 1.30-1.80%: Most modern steels come with molybdenum as it has a long list of additions to steel composition. For starters, it adds strength and toughness to the mix. It also adds corrosion resistance and enhances the hardenability of the metal.

Vanadium, 0.20-0.30%: Like the molybdenum, the vanadium is also a common addition to modern steel grades. It helps strengthen the steel and reduce the size of its grain.

Copper, 0.25%: This may not seem like a lot of copper but it’s already enough to make it more resistant to corrosion.

Phosphorus, 0.03%: When added to low-carbon steels, this element helps enhance the strength of the metal while increasing its machinability and corrosion resistance of the steel.

Sulfur, 0.03%: In higher amounts, sulfur will be an undesirable element in the steel structure. However, its very small amount still allows it to enhance the machinability of the steel.

As mentioned a few times above, the S7 steel is not a very hard metal. In fact, its working hardness is situated at around 48-58 HRc. It’s said that its sweet spot of hardness level is at 54 -56 HRc.

The S7 steel doesn’t contain enough chromium and other elements that can make this resistant to rust and corrosion so it is susceptible to such. This also shouldn’t come as a surprise since tool steels are non-stainless steel.

Most of S7’s features have been mentioned above already but to help those who want a more in-depth S7 steel review, here’s a more detailed look at its appealing attributes:

As mentioned a few times above, the S7 is best known for its toughness. It’s a high-strength steel grade that is capable of taking a beating. It will not easily chip, get deformed, or shatter.

Toughness is crucial for knives intended for hard use. While sharpness is always a priority for most cutting tools, toughness is also a must if it can survive chopping, whacking, and maybe even prying stuff. S7 steel can handle all of those things since it has great impact and shock resistance.

The S7 steel is also a popular choice among knife makers since it’s very friendly to work with. It’s easy to cut or machine and ready for heat treating.

Another great feature of the S7 steel is its sharpness. It can get a very nice and sharp edge thanks to its chemical composition so S7 knives can offer a very good edge.
Sharpening the best S7 steel knives is also fairly easy since they’re not very hard. This tends to make its upkeep a bit more manageable.

The S7 steel has a medium wear resistance rating. This means that it can handle some wear and tear but not to the highest degree.
However, since the S7 is non-stainless steel, it tends to require some coating to help protect it from corrosion and scratches. The right material can add a layer of wear resistance in S7 knives, so one can still expect to get a good product.

Since this steel doesn’t have a high hardness level, edge retention is not one of its top strengths. However, it can still hold its edge rather well, especially when used accordingly. Different blade steels are suitable for various functionalities so if an S7 knife is used for the right purpose, it’s possible for it to hold its edge for a long while.

With so many steel grades available, getting to know a new one can be a bit confusing for some. So to better establish what the S7 is like, here are its comparisons to some popular steel grades that it’s pretty similar to:

The 4140 steel is an iron alloy that shares quite a number of similarities to the S7 steel. So like the S7, this metal is also very versatile and can be used for a wide range of applications.

The main difference of the two, however, is that the 4140 can be rather soft unless it’s oil-hardened. This makes the S7 more preferable for some bladesmiths.

Not a lot of knives are made with the 4140 as well. So those who are looking for mass-produced options in this material might not find lots of options.

From the same steel group as the S7, the S5 is another popular tool steel that is used for a wide range of applications. It shares a lot of things in common with the S7 in terms of composition which is why the two are always pitted against each other.

The key difference they have, however, is that the S5 can reach higher levels of hardness. It can reach up to 62 HRc so it’s more capable of handling jobs that require higher strength. However, the S5 is also oil hardened so it tends to come with its own complexities.

As a carburizing alloy steel, the 8620 offers flexibility while being tempered. It’s often case hardened so its outer shell promises great wear resistance while covering a very tough and strong core. With its higher hardness rating, the 8620 steel might also be a good choice for knifemaking.

Is S7 Steel Good for Knives?

Is it ideal to use S7 steel for knife making? Many blade forgers and knife fans would say yes. The toughness of this steel grade makes it capable of handling many tasks that knives often need to accomplish.

It should be noted, however, that the S7 is not the perfect blade steel. Since it’s not very hard, it can’t hold its edge for a very long time. It will not chip or roll but its wear resistance is not high enough to keep it in shape with regular heavy use. It’s also not stainless steel so it can experience rust and corrosion.

However, for those who are after great toughness in their knives, this blade steel can be hard to beat.

It’s not uncommon for blade steels to have tradeoffs, especially when they’re exceptional in one area. In the case of the S7 steel, it’s incredibly tough but doesn’t have high hardness and is non-stainless steel so more maintenance can be required. It’s not a bad deal, though, especially for specific purposes.