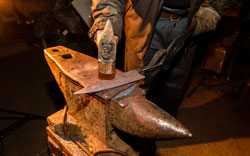 Looking at a few different steel grades, it’s easy to see that they come in a very wide variety of attributes and qualities. Some may have very similar compositions but can still end up with very different performances depending on how they were tempered. This is one of the reasons why not everything is meant for making knives, even if they’re widely used.

The A572 steel is one example of a popularly used metal but they’re not recommended for knifemaking. To know more about this particular steel grade, check out the details below.

The A572 steel is a low-alloy steel known for its high levels of strength. It’s classified as a structural quality carbon steel. It has five grades, categorized according to minimum yield strengths of 42, 50, 55, 60, and 65 ksi. Grade 50 is most commonly used and widely available.

Speaking of yield strength, the A572 steel is best known for this attribute. The Grade 50 can offer up to 50,000 PSI minimum yield making it pretty strong. However, since it contains more alloying elements compared to carbon steel, it’s not as easy to form than its counterpart.

Common Uses of A572 Steel

Among the most important items to mention in this A572 steel review is its list of common uses. Here are some of the applications it’s typically used for:

Like many other steel grades, the A572 has a relatively simple composition. It doesn’t have high amounts of a lot of elements but it has enough of most components to create a reliable steel.

Carbon, 0.21 – 0.26%: Compared to other steel grades, the A572’s carbon levels are pretty low. However, it’s already enough to give it a good dose of strength and hardness, especially when combined with the other elements.

Manganese, 1.35%: This element is a crucial component to turn iron into steel. It also functions as a deoxidizer, effectively removing oxygen and sulfur from the blend. In addition to these, it also adds strength, adds hardness, and reduces brittleness, making it an essential addition to very hard steel grades.

Phosphorus, 0.04%: Even in small amounts, phosphorus comes in handy for low carbon steels as it helps strengthen them. It also boosts its corrosion resistance and makes it more machinable.

Sulphur, 0.05%: While technically considered as an impurity in steel, sulphur can still contribute to its quality when added in small amounts. It improves machinability which is necessary for very hard steel.

Silicon, 0.15-0.40%: Silicon is also a deoxidizer, removing oxygen and excess sulphur from the mix. It also adds strength and hardness to the steel.

Vanadium, 0.01- 0.15%: This component is a highly desirable component among modern steel grades as it helps reduce the carbide size of the steel. This makes them stronger and increases their hardness, contributing largely to the performance and durability of the metal.

The A572 is not as hard as other steel grades that are commonly used for knifemaking. It doesn’t have an HRc rating, in fact. However, it is calculated to have a Brinell hardness rating of 135.

The thing with the A572 steel is, unlike other blade steels, it’s not hardenable. It can’t be processed to improve its hardness. Because of this, it tends to be not suitable for making fully functional knives.

While the A572 is generally resistant to corrosion, it’s not impervious to it. It’s not a stainless steel grade so it can be expected to rust especially when exposed to wet conditions and humidity.

In most cases, however, it only has surface rust. Some areas are more prone to such issues as well, like the parts that are machined and processed.

Properties of A572 Steel

To get to know the A572 steel better and discover what it can do and offer, here are its key features:

As mentioned a few times above, the A572 steel is a very high-strength steel. It is proven to be capable of withstanding high amounts of stress before becoming deformed or breaking. As a result, it can take on a serious amount of beating without any worries of breaking or shattering.

Despite not being a stainless steel grade, the A572 steel is also noted for its effective corrosion resistance. It’s not rust proof but it won’t easily get damaged by corrosion.

As mentioned above, it tends to get affected by surface rust when exposed to humidity and wet climate. However, it won’t easily corrode so its structural integrity can be guaranteed.

The A572 is also fairly machinable. It has its challenges but it’s not too difficult to work with. It’s also suitable for welding making it a suitable material for a long list of applications.

A572 Equivalent Steels or Alternative 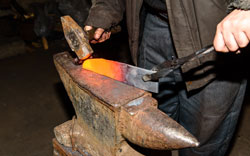 It might still be a bit difficult to grasp what the A572 is like without prior experience with the steel grade. So to better demonstrate its capabilities and attributes, it might be better to compare it with other more popular metals. Here are a few that can help.

Some call the A572 steel as an updated and modern version of the A36 and it makes sense. It has a higher amount of a few elements that improve the functionality of the steel grade so it can be a more appealing choice for a lot of applications.

But what exactly is the A36? This steel grade is quite a classic, popularly known as the most commonly used mild and hot-rolled steel. This reputation gives it quite an interesting authority in the industry.

Noted for its superior weldable properties, it’s also used in a wide range of structural applications. Some grades can be used for knifemaking but not as a single steel.

Another mild steel option is the A514. Similar to the A572, it’s also very high-strength with great weldability. This gives it quite a nice versatility and makes it easy to work with.

What sets the A514 apart from the A572 is that it’s stronger than the latter. It has a yield strength of 1000 psi, nearly double of the featured steel grades’ numbers.

The A572 is also a structural steel so it’s also mostly used for structural applications.

Is A572 Steel Good for Knives?

There are always questions whether they can use A572 steel for knife making but the answers are often on the negative side. There’s a reason why there aren’t commercially available knives made with this metal and it’s primarily because it’s not hard and not hardenable.

Some knifemakers use A36 steel for making knives that are for display and very light use only, however. It’s totally up to the blade forger whether they’d want to give it a try but because this steel doesn’t harden the way one would want to create a functional knife, it might not really offer the best results.

There may not be the best A572 steel knives or any knife made with the said steel for that matter, this steel grade still has a whole lot to offer to the public. Its participation in building infrastructures are very notable since it’s doing a lot of good work.

Tough, strong, and resistant to corrosion, this steel is still a popular one even if it’s not very useful for knifemakers.