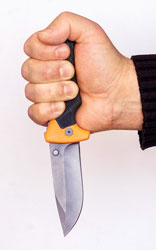 A non-stainless steel that convinced some to take the extra step in keeping it in top shape is the 8670M steel. Noted for its great edge retention and toughness, many find that the performance of this blade steel outweighs the care it requires.

Produced by Admiral Steel, the 8670M steel is described as a high-carbon alloy steel. It’s a part of the 86xx steel series which were created during WWII as a means to create steel while conserving nickel and other alloying components.

It’s said to be an alternative to the L6 steel. With that said, it can be expected to be very tough and capable of holding a good edge. Despite being relatively rare and pricey, it’s also said to be a good alternative to expensive CPM steel.

The 8670M steel is more commonly used by custom knife makers but brands like Zac Brown’s Southern Grind also offer products made with this blade steel. It’s not very popular despite being around for a while now possibly because it is non-stainless.

Like many other non-stainless steel that turn out to be reliable blade steels, the 8670M steel was not created for making knives. Its most common uses are the following:

To create a good foundation in this 8670 steel review, it’s crucial that the chemical composition of the said steel grade is looked into. This is particularly important as this specific metal is not as widely used or talked about as other highly sought after blade steels. What sets the 8670M apart? Its nickel content.

Carbon, 0.64 – 0.75%: The carbon content of the 8670M may not be a staggering amount but it’s already enough to give it a good level of hardness and strength to the blend.

Chromium, 0.30 – 0.50%: High levels of chromium provide excellent corrosion resistance but since the 8670M doesn’t have much, this can’t be said for this specific steel grade. It can add a good deal of hardness and hardenability to the mix, however, even in small amounts.

Molybdenum, 0.08 –  0.15%: Even with just a small amount of molybdenum, it can already add toughness and tensile strength as well as increase the hardenability of a steel.

Nickel, 0.70 – 1%: The high amount of nickel in the 8670M contributes to its toughness, hardness, and ductility. It also adds some corrosion resistance.

Manganese, 0.40 – 0.60%: Like carbon, manganese also contributes to the hardness and strength to a steel while decreasing its brittleness. It also serves as a deoxidizer to create a higher-quality metal.

Silicon, 0.20 – 0.35%: Silicon is also similar to manganese and carbon in that it helps increase the strength and hardness of a steel. It’s also a steel deoxidizer that helps refine the production process.

Phosphorus, 0.25%: Contributing to the corrosion resistance and machinability of steel are the main functionalities of phosphorus.

Sulfur, 0.1 – 0.25%: Sulfur is not necessarily deemed as an impurity in very small amounts like here in the 8670M. It helps improve machinability in such cases.

The 8670M has a pretty good hardness level. It’s rated at 58-59HRc in the Rockwell scale, which can explain why it’s known for its good edge retention.

The 8670M has a very low chromium content so it’s not a stainless steel grade. This makes it susceptible to rust and corrosion. Some say that this steel grade gets rusty quite quickly so it can require a good deal of upkeep to stave off the corrosion. 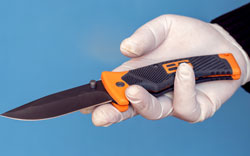 To qualify whether using 8670M steel for knife products is a good idea, here’s a roundup of its top attributes that can explain why it’s used by a few highly respected knife makers.

The 8670M may not necessarily have the highest hardness ratings in the Rockwell scale but it’s already a decent level that promises good performance. In fact, many may prefer items in its range as it can make them more manageable to sharpen.

With its decent hardness level, however, it can already guarantee resistance to heavy wear and tear as well as ensure that it will not be easily punctured or damaged in various ways.

The 8670M is best noted for its excellent edge retention. It might not be crazy hard but it can hold its edge quite well. This allows it to get a good edge as well, promising a nice sharpness to users.

With notable edge retention, the 8670M also wouldn’t need to be sharpened very often. This is a nice plus as it can help stave off rusting for knives that are coated with anti-corrosion materials.

Since this steel is not very hard, it has a good balance with its toughness levels. The 8670M is described by some knifemakers as a rugged steel grade so it can be said that it can take on quite a beating. With its high levels of toughness and strength, it won’t easily break or shatter when used roughly.

A downside to blade steels that are not very hard is that they can get worn out quite easily from the repeated friction they experience when used. The 8670M doesn’t have this problem as it is quite resistant to wear despite not being one of the hardest options out there.

Still can’t get a good grasp of what the 8670M is like? To further demonstrate its features and performance, here are some side by side comparisons with other more popular steel grades.

The 154CM steel is a highly coveted blade steel that is noted for its corrosion resistance, toughness, and edge resistance. It’s the Crucible Industries’ tweak to the classic 440C steel. By adding a high amount of molybdenum to the blend, they created an impressive steel.

Compared to the 8670M, the 154CM is harder and with better corrosion resistance. With these alone, it can already be said that the two are very different materials. It’s really the buyer’s choice when it comes to choosing between the two.

As the most popular among the 10xx steel series, the 1095 is often compared to lots of impressive steel grades out there. It’s a pretty basic steel, however, with lower toughness and higher brittleness than the 8670M. But since it is a lot more widely used for knifemaking, it’s easier to find knives made with this steel.

Also known as the “Swedish saw steel”, the 80CrV2 is another rather obscure steel grade that is noted for its toughness and edge retention. Like 8670M, it’s also commonly used for saw blades.

In terms of performance, the two are also very similar. It can be a tossup between the two depending on the availability and the preference of the maker or user.

Despite not being widely used for mass-produced knives, many still find the 8670M steel to be a suitable choice for knifemaking. A good proof of this is the fact that custom blade forgers use it for their special creations.

While it’s not highly resistant to corrosion and rust, those who don’t mind taking extra steps to maintain their knives have no qualms about keeping it dry just to enjoy its toughness and edge retention.

Want to know what the best 8670M steel knives are like and whether they’re worth the splurge? Here are a few examples that might make a good case for this steel grade: 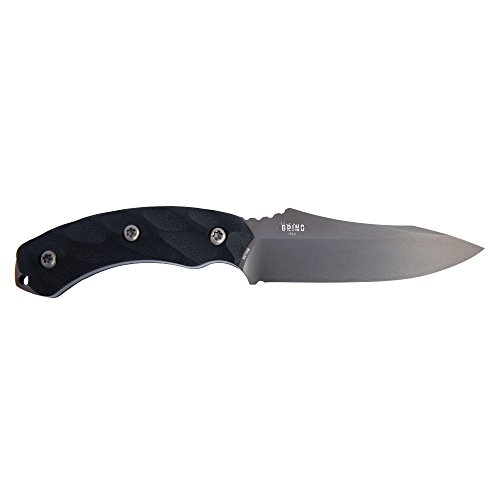 To best prove the toughness of the 8670M steel, the first featured item is a multifunctional fixed blade knife, the Southern Grind Jackal Fixed Blade Knife. Designed to handle all sorts of applications, it promises to handle rough use may it be from camping, bushcraft, survival, or fishing activities.

Aside from its functionality, the design of this item is also very notable. The blade has plenty of belly and can handle all sorts of tasks. The handle is easy and secure to grip with its size and shape. The sheath is also noteworthy as it has several mounting options.

Quality-wise, this product also promises top-notch performance. Since it’s made in the US, it can be expected that it’s made well. 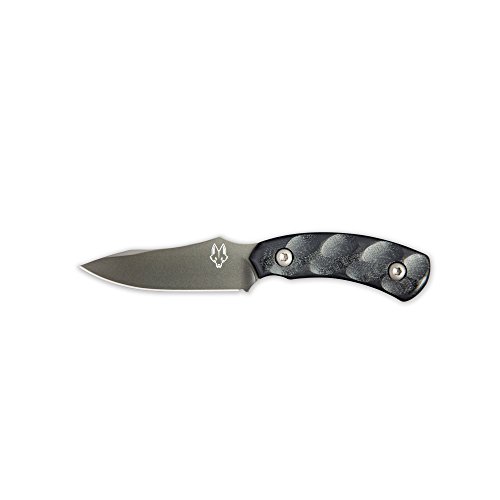 Those who are looking for something smaller and easier to handle and conceal might want to look into the Southern Grind Jackal Pup Fixed Blade Knife. This is a smaller version of the full-sized Jackal knife above so the same quality and performance can be expected.

Like the other item, this product promises good design and solid construction. Meant to be a hunting knife, it can handle heavy use despite its smaller size. It also functions as a reliable EDC in most cases.

Finished with a PVD coating, it’s effectively protected against rust as well. Maintenance is still required, however, especially after sharpening the blade for the first time.

It’s quite a shame that just because it’s non-stainless steel,  the 8670M steel is not very popular. Its performance can easily be comparable to a lot of high-performing blade steels with it’s high toughness and excellent edge retention. For many, convenience is really a deciding factor when it comes to choosing the best knife.

Has anything to add to this 8670M steel review? Share them in the comments below.