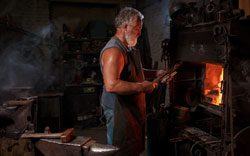 It’s natural, when you’re fully engaged in researching online various steels that may work best for the type of knife you’re looking for, that you eventually stumble upon steels that are not meant for use in knife blades. Such is the 4140 steel, which is the focus of this guide.

You won’t find 4140 steel in knife blades, unless you happen to find a custom knifemaker who’s experimenting various materials who ends up with a 4140 steel knife. That’s just an unlikely occurrence. There isn’t any list of the best 4140 steel knives here.

But you will find out exactly what 4140 is used for, due to its various properties. You can even check out the chemical composition of 4140s teel, and find out the various answers to questions you may have about 4140 steel. There’s nothing wrong about expanding your knowledge about steel in general. 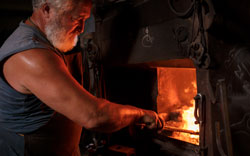 If 4140 steel isn’t a steel that’s normally used for knives, then what is it? There are several ways to describe 4140 steel, and we can start with its name, or rather its number designation.

The 4 in the number name indicates that it contains higher than usual levels of molybdenum. Then the 1 in the name refers to how it also contains more than usual chromium.

With the molybdenum and chromium levels, it’s called a “chromoly” steel, which is known for having greater strength (and greater cost) than mild carbon steel.

The 40 at the end distinguishes the 4140 from the other 41xx steels. This indicates its average carbon content. It is also considered a “low alloy” steel because the elements that join the main iron component usually don’t go beyond 5%.

The 4140 is commonly used in quite a few industries. More specifically, you’ll find it used for the following implements:

Let’s take a look at which elements (and how much of each) are present in the chemical makeup of 4140 steel alloy.

Carbon, 0.38% to 0.43%: On average, you get about 0.40% carbon. That’s higher than what you get for mild steel, as this carbon content is higher than the 0.25% carbon maximum you get in low carbon steel. The medium-carbon content explains the good resistance you get against abrasion and impact.

On the other hand, you can also credit the relatively “low” carbon level here for the toughness and high tensile strength of the 4140 steel.

Chromium, 0.8% to 1.1%: The chromium does help with the corrosion resistance, but there’s very little here when you compare it to the minimum 10% chromium required for stainless steel. For the most part, the little chromium here also improves the hardenability of the steel, and also its yield strength.

Manganese, 0.75% to 1%: Some consider the manganese as the 2nd most important element in a steel alloy, next only to carbon. The effects of carbon and manganese on steel are somewhat similar.

The manganese boosts the tensile strength and hardenability of the steel. It’s also takes out oxygen and sulfur out of the mix.

Silicon, 0.15% to 0.3%: In steel, silicon mainly acts as a “deoxidizer”, meaning that it takes out unwanted oxygen bubbles from the steel (in its molten state). It does help to strengthen the iron in the steel, and boosting the overall strength and hardness of the 4140 alloy.

Molybdenum, 0.15% to 0.25%: There’s not much molybdenum but it still helps quite a bit. It boosts creep strength, strength in elevated temperatures, corrosion resistance, and hardenability.

Sulfur, 0.04% at the most: We’ve already noted that sulfur is considered not a good thing in steel in general, which is why there’s a relatively large amount of manganese in 4140 steel. It’s regarded as an “impurity” in general. Too much sulfur lessens the impact properties of the steel (especially with low manganese levels).

But with this tiny amount, the sulfur actually helps as it improves the machinability of the 4140 steel.

Phosphorus, 0.035% at the most: This is another “impurity’ that can help when you limit its presence in steel to just tiny amounts. With this small phosphorus level, it improves the machinability of the 4140 steel and also boosts its tensile strength. You really don’t want too much phosphorus, however, as you can end up with brittle steel with low toughness and ductility levels.

The 4140 steel has a Brinell hardness rating of 197. But when converted to HRC hardness ratings (which you use for knives), you get a measly 13 HRC. It’s basically below normal HRC range.

After heat treatment, you can get higher hardness ratings giving it an HRC rating of 18 to 22 HRC. Some smiths are even able to do further heat treatment and increase the hardness way to the 40s HRC. But that’s still not enough for blades of any sort, although some people may find it useful for larger axes. 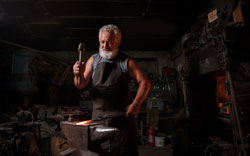 Here are the properties that you can expect from 4140 steel:

The 4140 steel is noted for its endurance. It can withstand loads for many cycles, without distorting and fracturing too easily. It’s this characteristic that makes it a popular steel for many types of industrial components, because it’s reliable.

The good ductility of the 4140 steel means that even if the load causes the steel to distort, it won’t break or fail too easily.

This is the property that makes some people think about using 4140 steel in axes. This is because when a steel is noted for its hardness, it’s also likely to have a low toughness level. But 4140 steel isn’t all that hard, and conversely, it’s quite tough.

Toughness in steel requires a balance between ductility and strength. Strong yet brittle steels are not tough, and neither are extremely ductile steels with low strength ratings. With 4140 steel, you get the balance just right.

This refers to the steel’s ability to harden. It’s a crucial feature because it defines how easy it is to use heat treatment on the 4140 steel.

It may not be stainless steel, but it offers decent corrosion resistance that you don’t get with other steels that you may use for industrial components. 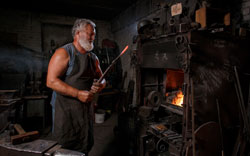 The two have basically identical alloy compositions. But 4140 steel is harder. It has greater fatigue strength, shear strength, and tensile strength.

The 4130 steel contains lower levels of carbon and manganese, and you find greater strength and hardenability in 4140 steel as a result. It’s true that the 4130 steel is easier to weld, but the 4140 steel is more resistant to wear.

Can the 4140 steel work for knives? Technically, it can. That’s to say, that it’s not truly bad as is. It’s just that there are plenty of better alternatives. It’s like saying you can drive across the US from New York to Los Angeles, but it’s a lot more efficient to just ride on a plane.

Some bladesmiths make custom knives out of 4140 steel, but it’s mostly for practice. The Horse Knives brand used to make knives with 4140 steel, but even they switched to the better O1 tool steel alternative.

Most of the people who need to know about 4140 steel are in the business of manufacturing tools and other industrial components. For these purposes, 4140 steel is actually ideal. Its characteristics lead to great performance for crankshafts, gears, bolts, and nuts because the steel offers great fatigue strength, terrific toughness, and high resistance to wear and abrasion. A lot more types of steel are more likely to fail, compared to the 4140 steel.

As a consumer or a knife enthusiast, you won’t really have to concern yourself with 4140 steel. You’ll rarely, (if ever) find it in commercially produced knives. But if you’re interested in creating your own knives, then you may want to practice your techniques with 4140 steel.

No, it’s not. This is because stainless steel requires at least 10% (or even 12%, according to some) chromium for corrosion resistance. AISI 4140 is a low alloy steel, meaning all the elements added to the iron don’t even exceed 5%.

If we define “tool steel” as steel that’s ideal for tools and other similar types of equipment, then yes, it’s a type of tool steel. Tool steel types are known for meeting a certain hardness standard, joined with a certain level of corrosion resistance, and 4140 steel meets those requirements.

It’s hard enough due to the addition of the carbon and chromium. The molybdenum also strengthens the alloy, but it also boosts the corrosion resistance.

With the hardening and tempering processes usually used for 4140 steel, it’s even more suitable for use in making tools. These processes boost the tensile strength, and also makes it stronger against higher temperatures.

Yes, you can weld 4140 steel. But you will have to follow some basic guidelines. You have to be careful, and you need to keep in mind that the priority is to control the cooling rate. The high carbon content tends to increase the difficulty, and you have to preheat the 4140 steel before welding so as to avoid cracking issues.

The 4130 steel has higher than usual levels of chromium and molybdenum, and the same goes for 4340 steel. But the 4340 steel also has lots more nickel, leading to greater tensile strength and yield strength than with 4140 steel. However, this advantage also makes 4340 steel a bit more expensive.

The term “mild steel” also refers to low carbon steel, meaning the types of steel with relatively low levels of carbon. Now, experts may differ on what “low” carbon level may really mean, but most of them tend to consider this as within the 0.05% to 0.25% carbon. The 4140 steel is considered as medium-carbon steel, as it contains at least 0.38% carbon. So, it’s not actually all that mild.

Short answer is yes, 4140 steel can rust. It’s true that the 4140 steel doesn’t rust as easily as other steels do, thanks to the relatively high amounts of chromium and molybdenum in the 4140 chemical composition. but there’s a lot of iron in its makeup. Once it starts to show signs of corrosion, it will rust just as quickly as the other steels.

What industries use 4140 Steel?

While 4140 steel may not be commonly used for knives, you can find it used for many industries, including the defense, agricultural, and automotive industries.