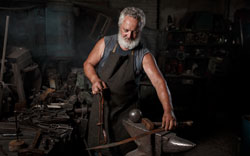 Like with anything that’s hard to come by, rare steels also tend to make a lot of buzz among knife aficionados. They have this mystique and charm that makes them more appealing to custom knifemakers. And if they’re a super steel like the BG42 steel, some folks will really take the extra mile to get them.

With scarce supply, the said super steel is sought after by many steel fans. This BG42 steel review will help those who want to get to know it better. 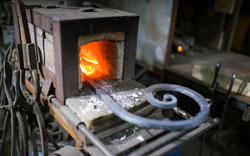 Even without ready supply, information on the BG42 steel is easily available. Lots of people are talking about this super steel manufactured by Latrobe. They describe it as a “double vacuum melted martensitic stainless high speed steel” created using the VIM/VAR technology.

Said to be a super clean steel, it’s also considered by many as the best ingot steel. It gained popularity when Chris Reeve Knives used it in their Sebenza knives. Other high-end knifemakers followed suit. Using BG42 steel for knife products took off nicely because of the steel’s excellent toughness, corrosion resistance, and edge retention.

Despite its popularity, not everyone who wanted one was able to get their hands on one. As mentioned above, the supply of this steel was scarce. Some even believe that it’s not available nowadays anymore. However, versions of it are said to become available like the CTS-B75P of Carpenter Steel.

These are the most common uses of the BG42 steel: 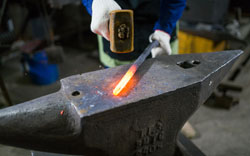 BG42’s chemical composition may not seem so different from other super steels but its manufacturing process supercharged it. Its core components are the following:

Carbon, 1.15% Carbon is an essential addition to any steel as it’s one of the most basic components of such objects. However, aside from making steel steel, it also hardens the steel. With BG42’s high amounts of carbon, it can be guaranteed that it can get hard enough to suit the requirements of a wide range of applications.

Chromium, 14.50% Chromium is best known for its corrosion resistant properties in high levels. As BG42 has quite a bit of it, it’s considered as stainless steel, making it resistant to rust and stain as well. High amounts of chromium also help add hardness to steel.

Manganese, 0.50% This element primarily serves as a deoxidizer in steel to create a cleaner output. However, it also helps add hardness and decrease brittleness of a steel which enhances its performance.
Molybdenum, 4% Most super steels contain molybdenum since it adds a lot of features to the mix. For starters, it increases the corrosion resistance of the metal without the risk of increased brittleness which is common with very high levels of chromium. It also enhances hardenability, tensile strength, and toughness of a steel.

Vanadium, 1.20% Another common ingredient in super steel, V controls the grain size of the steel so a harder and stronger output can be achieved. The amount in BG42 may not seem like much but it’s already enough to get excellent results.

Silicon, 0.30% Like manganese, silicon is also a steel deoxidizer that also helps increase the strength and hardness of a steel.

The BG42 steel is not necessarily exceptionally hard but it’s still fairly hard which makes it possible to offer incredible edge retention. It’s Rockwell scale rating for hardness is 60-61HRc.

With its high levels of chromium, the BG42 can be classified as a stainless steel grade. With the addition of high amounts of molybdenum, the effects are enhanced. This means that it’s not easy to stain or get rusty. 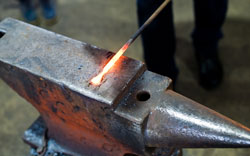 Most attributes of the BG42 steel have already been mentioned above but what exactly do they mean? Here’s a closer look at the features that make this super steel very notable.

A dull knife doesn’t really make for a very functional tool so something that gets sharp nicely and holds its edge well is always desirable. This is the very case for the BG42 since it has refined carbides which creates a good edge. Combined with how hard this metal can get, it guarantees that it won’t easily roll or get damaged by friction and abrasion.

Based on its Rockwell scale rating, it can be said that the BG42 steel is a hard steel. It’s not one of the hardest out there but it’s still in the mid-range which makes it suitable for making knives. It also has qualities that make it hardenable so it can be tempered to a good degree that will make it perform well as a knife.

Equipped with a good level of strength, this metal is also quite tough. It will not easily break or shatter even if it’s used roughly or if it experiences a high amount of strain.

As a stainless steel, it can be expected that the BG42 will be able to resist corrosion effectively and will not easily stain or get rusty. This makes it suitable for use in just about any kind of condition or environment.

Thanks to its high hardness level, the wear resistance of the BG42 steel is also notable. Even with heavy use it promises not to lose its edge easily. This, however, tends to make knives harder to sharpen but with the right techniques and tools, it’s not an impossible task to do.

Since the BG42 steel is not readily available, some might be interested in the alternatives they can go for. Here are a few that are worth looking into.

A super steel that is hailed by some as the ultimate EDC blade steel is the S30V. Since it was designed in collaboration with a famous knife maker, it can be said that it was crafted to function as a high-performing blade steel.

Composition-wise, the S30V has more components than the BG42, some are even unique since the former has a tungsten base.

Performance-wise, however, both offer great edge-retention, toughness, and corrosion resistance so it might be a tough call. Some like the BG42 better, however, because it’s easier to sharpen.

As the updated version of the S30V, it can be expected that the S35VN offers a few improvements to the older metal. It has an improved toughness and enhanced overall performance so lots of knifemakers love it.

Compared to the BG42, however, the BG42 still gets to hold its edge better. This is why, even with its improved performance, many are still looking for knives made with this rare steel.

As a ‘gold standard’ steel, the VG10 is another super steel that many love. It’s tough, resistant to corrosion and wear, and holds an edge well. It’s also relatively easy to sharpen compared to other super steels, giving it a nice leg up in the competition.

In terms of performance, the BG42 and VG10 are quite similar. It’s all about the quality of the steel when it comes to these two as both work well for knives. Also, it’s a matter of availability as well, especially for custom knifemakers as both can be hard to get hold of.

Taking the classic D2 to the next level is its powder metallurgy version, the CPM D2. With a reduced carbide size, it promises to create better edges and a more balanced property profile.

With higher amounts of chromium, vanadium, and molybdenum and a cleaner processing method, the BG42 still offers better performance as a blade steel. The CPM D2 may also need more upkeep with its lower chromium content.

The CP M4 is another highly popular blade steel for its toughness, edge retention, and wear resistance. It’s a top choice by some of the biggest knife manufacturers so you can count on it to be reliable and high-performing.

While it offers excellent attributes, the M4 is not a stainless steel grade. So it has a trade off of requiring a bit of maintenance. This is where BG42 shines as it doesn’t require much upkeep.

Another highly coveted supersteel is the M390. This has all of the components one might want in a blade steel and in high amounts, too, so excellent performance can be expected. It has incredible edge retention and toughness but its corrosion resistance also blows the competition away.

Compared to the BG42, the M390 is considered as a higher end steel. This, and the fact that the former is harder to source, makes it more preferable to some.

Is BG42 Steel Good for Knives?

It can be said that using BG42 steel for knife products is a very good idea for a few reasons. For starters, judging from its features alone, it ticks a lot of boxes in what people want in a blade steel. It’s tough, gets a good edge and holds it well, as well as corrosion and wear resistant.

Another reason is that it was successfully used by some of the most respected manufacturers for some of their top-selling products. Even years after getting sold out, the BG42 Sebenza knives are still raved about by owners and still in demand from knife fans and collectors.

Deemed by some as a nearly perfect blade steel, there’s a lot of good reasons why the BG42 steel continues to stay relevant and sought after all these years. It’s edge retention, corrosion resistance, and toughness truly offer a dependable knife.

Have anything to add to this BG42 steel review? Share your opinions, experience, or knowledge about this steel in the comments.