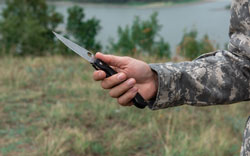 For many, a compromise is always involved when it comes to choosing a blade steel. This is why buyers need to know exactly what they need and want from their knives so they can choose accordingly and get satisfying results.

But what if one wants to tick all of the boxes in order to consider a steel grade as the right one for their needs? Is it possible to find such a thing?

For many steel enthusiasts and experts, the LC200N steel is such an option. Described to be one of the few metals that break established conventions in the steel industry, it can be the very thing some folks are looking for.

By definition, the LC200N is a high-chromium, high-nitrogen alloyed tool steel. It’s a stainless steel grade despite being a tool steel. It’s produced through the ESR or electroslag remelting technology wherein consumable electrode is remelted while the steel is also solidified and refined at the same time.

The LC200N is also known as the Z-Finit steel and the Cronidur 30. The Cronidur 30 is a premium steel which traces its roots back to NASA’s Space Shuttle program. While it was not created by the scientists at NASA, it can be assumed that the steel grade was created to meet the rigorous requirements of building a rocket.

Initially, the Cronidur 30 was exclusively available to Boker USA and was very expensive so it was not used as a blade steel right away. It was only when the German manufacturer Zapp made the LC200N more widely available that the steel grade took off in the knife industry.

It was later renamed as the ‘Z-Finit’ which stands for Zapp Fine grain Nitrogen steel. This moniker gets to describe its composition and build quite adequately. While it doesn’t indicate any amounts of its key elements, it still managed to express what the metal is about.

The LC200N steel is pretty versatile as it is suitable for use for various applications including the following:

To establish a good base for this LC200N steel review, here’s a quick rundown of its chemical makeup:

Carbon, 0.30%: Compared to other super steels, the LC200N doesn’t have a sky-high carbon content but it’s already enough to get its desired effect. This adds strength to the mix as well as increases its hardness and hardenability.

Chromium, 15%: Noted as a high-chromium steel, the LC200N has quite a lot of chromium. This classifies it as a stainless steel which makes it highly resistant to corrosion. It also helps harden the steel.

Nitrogen, 0.5%: This component commonly comes in trace amounts in steel. High levels of it, like in this case, tends to increase the hardness of the steel as well as its wear and corrosion resistance.

Molybdenum, 0.95%: Helping balance out the hardness of the LC200N is the high amounts of molybdenum in the mix. It also enhances its corrosion resistance, tensile strength, and hardenability of the steel.

Nickel, 0.5%: This also helps add toughness to the LC200N as well as improved hardenability and hardness.

Manganese, 1.00%: This works as a deoxidizer in the blend while improving the hardenability and tensile strength of the steel.

As the LC200N ticks all of the boxes when it comes to the most desirable attributes in a steel grade, it can also be expected to have good hardness levels. It’s rated from 59 to 60HRc, so it is pretty hard. It’s not one of the hardest steel grades out there but its level is already impressive.

As mentioned above the LC200N steel is a stainless steel. This means that it’s not prone to getting rusty. This also means that it doesn’t require very special care instructions to keep it from getting stained, developing a patina, or getting damaged by corrosion. 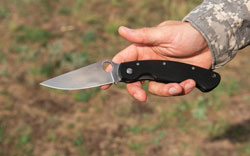 Most steel grades can offer a good balance between their attributes but not a lot of them can promise to fare at the same level as the LC200N steel. Here are its features to better explain this point.

First on the list is toughness. It’s always important that a knife can be able to handle rough use since it is often seen as a tool. While it’s not necessarily meant to be used to apply force on other stuff, sometimes, it can be the only thing suitable for such tasks. As a result, a good knife also needs to be tough.

With several components that are designed to add toughness to the LC200N, it can be expected to be capable of taking a good beating. It can be a durable blade steel and won’t easily chip or break.

Lots of people look for blade materials that can get very sharp and hold an edge for a long time. This is the case for the LC200N since it’s quite hard. Because of this, it won’t easily shave its material off when subjected to abrasive and adhesive damage. Its edge will stay intact even with regular use so it won’t require very frequent sharpening.

One of the top reasons why the LC200N steel is quite popular is its ability to resist rust and corrosion. It’s high levels of chromium plays a huge part here.

As a result, the LC200N is relatively fuss-free to have. It won’t require special measures for upkeep since it won’t easily get stained. This also makes it suitable for use in wet and humid conditions and environments.

LC200N also has good levels of wear resistance. Aside from being capable of staying sharp with heavy use, it also won’t easily get blunt or lose its luster in a short period of time.

Lastly is the fact that the LC200N is a hard blade steel. As said above, it can reach up to 60 HRc which is higher than a lot of other popular steel grades. This means that it’s capable of resisting puncture damages and can withstand high amounts of pressure applied to it.

Blade steels with high hardness levels are also good options for those who do not want to sharpen their knives frequently. Most hard knives tend to hold their edge well so they don’t require frequent sharpening. This is a great plus as hard metals can be very difficult to sharpen.

Like the LC200N, the H1 is also a nitrogen-based steel grade like the LC200N so it’s quite different. It also offers a good balance of everything one might want in a blade steel. It’s best known for its corrosion resistance, however, so it’s often used in wet conditions and in humid climates.

The main difference, however, is that the H1 is pretty much a mid-tier option. It’s also not as good in edge retention as the LC200N steel is, so there’s still compromise required when looking into this blade steel.

Hailed by some as the “ultimate EDC steel” or as “the absolute best blade steel available”, the S30V is definitely a popular premium steel grade. This shouldn’t be surprising, however, since it’s crafted by experts Dick Barber of the Crucible Industries and famous knife maker Chris Reeve.

As a premium steel, the S30V is more expensive than the LC200N. This tends to be a deal maker and breaker for consumers between the two because quality-wise, they’re very similar.

Made by a leading steel manufacturer, the M390 is another highly coveted steel grade for knives. It’s categorized as a specialty steel, mostly because it was formulated to be able to handle incredible amounts of wear and tear.

Like the LC200N, the M390 also offers a good balance between hardness, toughness, and corrosion resistant. In fact, it’s more resistant to rust because of its exceptionally high chromium levels.

Is LC200N Steel Good for Knives?

Wondering if using LC200N steel for knife products is a good idea? The answer here is yes. This material is already used widely in knife and blade products and is actually highly coveted as such. Its good reputation is a nice sign that it delivers good results as a blade steel.

Want to know what the best LC200N steel knives are like? Here are some popular picks that can best demonstrate its qualities. 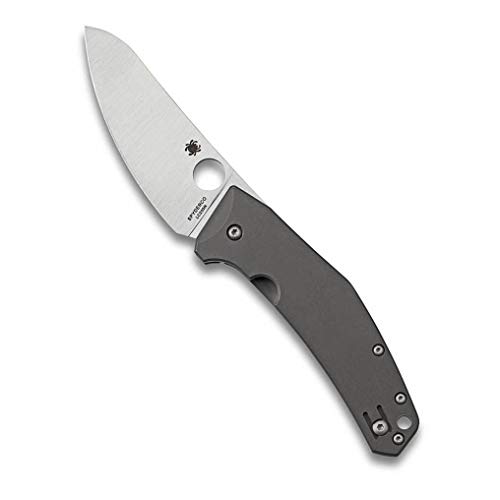 Starting this list strong is the Spyderco Spydiechef Premium Chef Folding Knife. It offers the performance and functionality of a chef’s knife in the form of a folding knife, offering a unique take on an EDC.

A good explanation to its unique design is the fact that famous knifemaker Marcin Slysz crafted this particular product. With his fresh take on this tried and tested format, he put the nice balance and user-friendly ergonomics of the best chef’s knives into an all-purpose, everyday carry folding knife.

While many users found the shape of the blade a bit odd at first, they were eventually won over by its handling and performance. Its edge retention and corrosion resistance are considered to be among the best in the market. 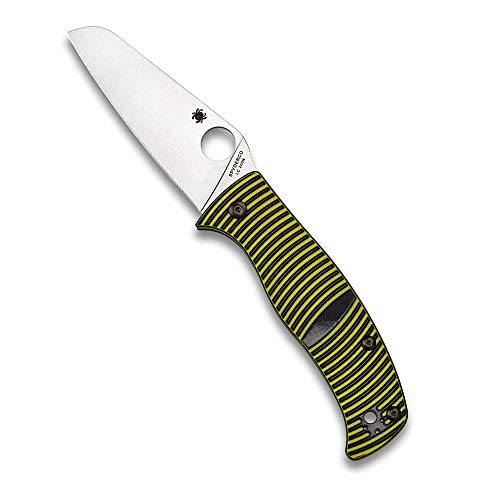 Next up is another very popular LC200N knife option, the Spyderco Caribbean Salt Sheepfoot Folding Knife. While the Salt series in itself is highly favored by adventurers and outdoor aficionados, the Caribbean range has its own charm.

There are several distinguishing features for the Caribbean which makes it very interesting. For starters, it’s available in different serration styles so buyers can choose which one suits their needs best. It also has blunt-tip varieties, making it ideal for rescue operations and while in inflatable watercraft.

Its handle design also helps it stand out in a grand way. The highly contrasting black and yellow coloring is definitely eye-catching. It’s also carefully designed to ensure a good grip, even in wet conditions. 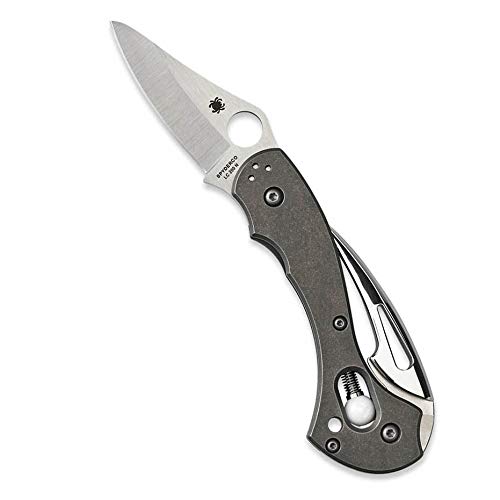 Completing this list of the best LC200N steel knives is the Spyderco Tusk High-Performance Mariners Tool. Described as a multifunctional mariner’s tool, it traces its roots back to the early 1980s when Spyderco founder Sal Glesser first came up with the idea behind its design.

The Tusk isn’t an old model, however. It was only recently released since it was deemed to be too advanced when it was initially conceptualized. Appearance-wise, it certainly looks very futuristic with its sleek curves and lines.

Since this item is not just a folding knife, users can also get a 300-series stainless steel marlinspike at the opposite end of the LC200N blade. This is meant to help in loosening knots, adding more functionality to this very handy knife.

Equipped with high-grade materials and a few proprietary technologies from Spyderco, the Tusk promises reliability and superior performance. Add to these the great details added to its design and it makes for a very attractive option. Its reversible tip-down carry clip is definitely worth noting as it makes the knife a lot more convenient and easier to carry around.

With how it was made to tick all of the boxes knife aficionados look for in a blade steel, it’s easy to see why the LC200N steel is a highly preferred pick by many. For everything it can do, it’s also relatively reasonably priced, especially the mass-produced products. This is why it’s not so surprising that a lot of people are interested in getting one.

Got a few more details or personal stories to add to this LC200N steel review? Share them in the comments for everyone to read.