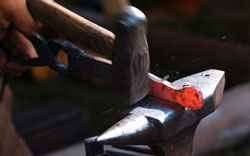 It’s been said before but it bears repeating: there are lots of different steel grades to cater to the different needs and requirements of users. Some are for making the toughest structures and tools while others are very delicate and soft in order to be malleable enough for certain applications. It’s really a matter of knowing which one will suit one’s needs.

The 203e steel is among the softer varieties with its low carbon content. However, this doesn’t mean that it can’t be used for blade forging. In fact, it can even play an interesting role in the process.

To get to know what it can do, keep reading this 203e steel review. 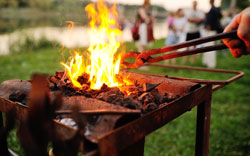 Also known as the A203 Grade E steel, the 203e steel is a mild steel with low carbon content.

It’s often categorized as a nickel steel which is a type of steel that is characterized by their comparatively finer structure than what conventional steels have. This quality is attributed to the element nickel which hampers and keeps grains from growing in size.

The 203e also made waves at one point for being a top choice in forging Damascus steel. With its malleability and bright coloring, it makes for an interesting material in adding to a harder and tougher blade steel.

While not the toughest, hardest, or most resistant to corrosion, the 203e steel has a number of impressive purposes. Some of which are the following: 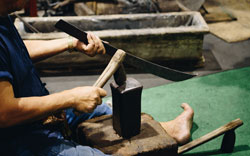 Those who have not come across a popular material for Damascus steel yet might find the 203e quite fascinating. Its combination of ingredients is not like what is commonly used in blade forging. Its key component? Nickel.

Carbon, 0.20 – 0.23% The very low carbon content of the 203e is the very reason why it has lots of unique characteristics. For starters, it explains why it’s not hardenable enough to function as a blade steel on its own. However, with just a small amount of carbon, it also promises to be less brittle and more easily weldable.

Manganese, 0.78 – 0.88% As a deoxidizer, manganese ensures that the blend is of sound structure. It can also strengthen a steel and further reduce its brittleness.

Silicon, 0.13 – 0.45% Often present in steel in miniscule amounts, silicon can help further deoxidize the blend to stop carbon and oxygen from reacting to each other during the heat treatment process. It also adds strength and hardness to steel.

Phosphorus, 0.035% This element is a great addition to low carbon steels as it helps strengthen them if they cannot harden them. It can also add corrosion resistance as well as boost a steel’s machinability.

Sulfur, 0.035 – 0.040% This element is always an interesting addition to steel grades because it’s quite a paradox. It’s supposed to be an impurity that needs to be removed from the blend to keep it from getting brittle.

Nickel, 3.18- 3.82% As the most notable component of the 203e, nickel contributes largely to what this alloy is like. It gives the 203e the qualities it needs to be suitable for making knives, even if it’s not a good choice for blade steels on its own. It increases hardenability, toughness, strength, and ductility of a steel grade.

The information on the hardness level of the 203e steel is quite hard to find. Manufacturers don’t necessarily advertise this detail, possibly because this particular item is known for its softness. Some list it, however, at 170 Brinell rating.

Any knife nut or metallurgist can quickly tell that the 203e is not a stainless steel. It doesn’t have a significant amount of chromium in its blend so it relies on its phosphorus and nickel content to keep rust at bay.

However, at just 3% nickel, it’s not enough to fully protect the steel from corrosion. In fact, a steel needs just about 8% of nickel content to achieve similar effects. It shouldn’t be significantly less or more, however, as it will still be susceptible to rusting. 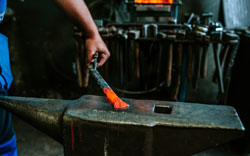 A lot has been said about the 203e steel above but not much has been mentioned about its actual attributes. Here’s a quick roundup of the features this steel can bring to the table.

Based on the applications this steel is typically used for, it’s not impossible to see that the 203e steel can be pretty tough. If it can handle serving as a reactor shell and other pressure vessels, then it means that it can take a good amount of strain.

Like other high toughness steel grades, this material won’t easily break or chip.

With its high toughness also comes its good wear resistance. This material will not easily come off when subjected to abrasive and adhesive damage. It promises good durability, especially when used with an excellent core blade steel.

Working with the 203e steel is not that difficult to do. It’s not very hard so it’s easier to machine and cut in most instances.

Lots of knifemakers who were already around during the heyday of the 203e steel for cladding profess that this blade was popular because of how it looks. Its brightness in color gives it a striking contrast with other steel grades, creating an irresistible allure among those who cannot say no to a pretty blade.

The best 203e steel knives tend to sport a very appealing appearance. The lightness and patterns of the 203e when combined with a darker steel can make for an undeniably eye-catching piece.

Is 203e Steel Good for Knives?

This question doesn’t have a straightforward answer as it’s both a yes and no. ‘No’ because the 203e cannot harden enough to be used as a fully functional blade steel. It’s simply too soft for the kinds of jobs knives are often subjected to.

It’s also a yes because it’s still possible to use 203e steel for knifemaking. It’s not necessarily used for the core blade itself but since it’s still added to the blade for a specific purpose, it can still be considered as a good fit for forging such tools.

It’s a matter of balancing out the features of the core steel with the outer steel to create harmony among their features.

What other steel grade can the 203e be compared to? Here’s one that might help demonstrate what this alloy actually is.

The 15n20 is often mentioned when talks about the 203e come up as it practically replaced the latter as a top choice for an outer layer in forging Damascus steel. Many made the switch because it offers better results due to its composition.

This is quite interesting because even with very similar composition, these two are very different steel grades. In fact, the 15n20 can get very hard so it adds an extra layer of protection to the core steel. It also offers excellent edge retention so it can do a bit more than what the 203e steel can offer.

Both items are not stainless steel, though, so those who want practicality should take this detail to heart.

Tough and visually striking, the 203e steel can offer both form and function when making Damascus steel. It may not be hard enough to serve as a fully functional blade steel but it can make up for that by being a great addition to a lot of steel grades.
Want to add to the discussion? Share your comments below.