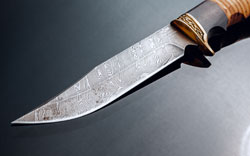 It’s normal for a lot of people who want a serious knife to take a look at some of the fanciest steel grades available. They promise a lot of exceptional things so why not give them a shot, right? However, this doesn’t mean that simpler and more basic options should be forgotten about.

Take the 10xx carbon steel series, for example. Despite their simplicity, they’re widely used for rough use knives as they hold up pretty well to regular wear and tear. One option to consider from this line is the 1085 carbon steel.

How does the 1085 steel hold up when used in knife products? Find the answer to this pressing question below.

To learn about how the 1085 carbon steel performs as a knife blade, it’s important to define it first. As suggested above, this particular steel grade is a high-carbon spring steel.

The 1085 is not as well-known as the other steel grades in its series but it’s still widely used for knives and cutlery items. It is still noted for its toughness, shock resistance, hardness, and easy sharpening.

Like the other 10xx steel grades, the 1085 also comes with a few caveats. For starters, it’s not stainless steel so it cannot guarantee excellent corrosion resistance. But contrary to popular belief, it also won’t rust right away, especially with the proper treatment, finishing, and maintenance. It will develop a nice patina, however, that lots of people tend to find appealing.

Most people may know the 1085 steel for knife products but it’s also widely used for other applications. Some of the most popular examples are the following:

Those who are familiar with other 10xx steel grades will find the composition of the 1085 steel to be not so different from the others in the series. The composition is pretty simple but it has a good balance to it that makes it unique and quite distinguishable from the others.

Carbon, 0.80 – 0.93%: While considered as a high-carbon metal, its carbon content is still low enough to keep it from being brittle. It’s at a good level to achieve ample toughness and hardness that make it capable of handling rough use.
Manganese, 0.70 – 1%: This component aids in boosting the strength and hardenability of metal. It also counteracts brittleness, making it a great addition for steel grades with high hardness levels.
Sulfur, 0.05% (max): While sulfur in high amounts is not desirable in steel, it can still contribute to the machinability of a particular metal. With this, the 1085 promises to be easier to work with.

Phosphorus, 0.04% (max): This element also helps in strengthening the steel and increases its corrosion resistance. So even without high levels of chromium, the 1085 is still not as corrosive or rust-prone.

Similar to the other 10xx steel grades, the 1085 also contains small amounts of copper, chromium, aluminium, molybdenum, and nickel. These contribute in the improvement of this steel’s overall corrosion resistance, hardness, and toughness.

It’s difficult to find exact information on the Rockwell rating of the 1085 steel but manufacturers of unprocessed 1085 tend to put it from 50-66 HRc, depending on the product. These figures may seem odd but with its highly machinable and its hardenability traits, it’s easy to see why it can come in different hardness ratings.

Yes, like the other steel grades in its series and other high-carbon, low-chromium steel grades, the 1085 is not classified as stainless steel. It is susceptible to corrosion and rust when exposed to high levels of moisture and humidity.

However, like the others in the 10xx steel series, the 1085 still has some corrosion resistance capabilities. It will get rusty when not maintained properly but the process wouldn’t happen in a flash like how other knife fans tend to make it out to be.

What are the traits that can be expected from the 1085 carbon steel? Here are its key properties:

Again, like the others in the 10xx steel line, the 1085 is also made to be very tough and strong. This is achieved by its high carbon content. But because it’s still on the low end of the scale, it’s still not enough to make it brittle.

As a result, the 1085 promises to be able to handle heavy and rough use without the threat of breaking and shattering. It can take quite a beating, making it a suitable choice for everyday carry knives.

Since the 1085 has one of the higher carbon contents in the 10xx steel range, it also has a higher hardness level than the others. This makes it capable of holding its edge longer. Compared to the other steel grades with lower carbon content, the 1085 is already capable of staying sharp for a longer period of time.

Among the biggest charms of the 1085 steel (and the 10xx steel series, in general) is their high machinability. This means that it’s very easy to be cut or ‘machined’ to achieve a specific size, shape, and even surface finish.

A steel grade with this property makes it a good choice for a lot of forgers as it won’t be too tricky to work with. Seasoned and expert knife makers tend to recommend the 10xx series to novices as it also allows for a lot of learning room for those who are just getting acquainted with the craft.

Technically, the 1085 steel isn’t highly rust-proof or corrosion resistant since it doesn’t have components that can make it so. It will get rusty if kept wet for long periods of time.

However, contrary to popular belief, it won’t get rusty in a flash. The 1085 carbon steel’s phosphorus levels and trace contents of chromium and copper are enough to make it relatively resistant to corrosion for a high-carbon, non-stainless steel metal.

So while it will still require a good amount of care, it also won’t corrode in a blink of an eye.

To get a better grasp on what the 1085 carbon steel is like and how it holds up against other steel grades, here are some comparisons with other metals that it’s often pitted against.

Since the 1095 is one of the most popular options in the 10xx steel series, it’s impossible not to compare the 1085 to it. Add to this the fact that the two have very similar components and it’s easy to see why people find themselves torn between them.

The thing with 1085 and 1095 is that the latter may have higher carbon content but it has lower manganese content. This makes the 1085 tougher than the 1095 but in terms of hardness, the latter wins.

In terms of performance, however, a good 1085 knife will offer the same performance as a good  1095 knife. This is why some turn to technicalities when choosing between the two.

Like with the 1085 and 1095 comparison, the 1075 and 1085 comparison is a tight race. The two also have very similar specifications, only varying slightly in the carbon and manganese levels. However, with the 1085 having higher amounts on both components, it promises to be tougher with better edge retention.

Another member of the 10xx steel family is the 1060 steel. It has a lower amount of carbon than the 1085 but nearly has the same amount of manganese content. As a result, they may offer similar performance.

Like the 1095, the 1060 is also quite a popular option. It’s often used in swords and is deemed as one of the best materials for katanas.

The D2 and 1085 are two very different steel grades but since the 1095 is often pitted against the D2, some might also find it interesting to check how the 1085 holds up against it.

The results are pretty much the same, however, since the 1095 and 1085 are similar. With the D2 being a high-carbon, high-chromium steel, it promises better wear resistance and edge retention than the 1085.

The A36 steel is a low-carbon steel that is notable for its welding properties. It’s very easy to work with but it’s very soft and flexible so lots of knife enthusiasts do not find it to be a good material for blade forging.

The Japanese SK5 steel is also a very similar steel grade to the 1085. The carbon and manganese contents are nearly similar but the additions on the SK5 tends to make it quite hard and resistant to corrosion. It’s slightly pricier than the 1085, however, so that might be worth considering.

Used by custom knife-makers and commercial manufacturers alike, it can be assumed that the 1085 is a good choice for most kinds of knives. Like the other steel grades in its family, it can also be a very good option for novice knife-forgers since it’s quite easy to work with.

With its high-machinability and durability, the 1085 can teach new knife makers a thing or two about the process and hone their forging skills further. They can also be a good choice for enthusiasts who enjoy the process of regular cleaning and sharpening of blades.

Want to know what kinds of cutting implements the 1085 can make? Here are some of the best 1085 steel knives to look into for those interested in this particular steel grade. 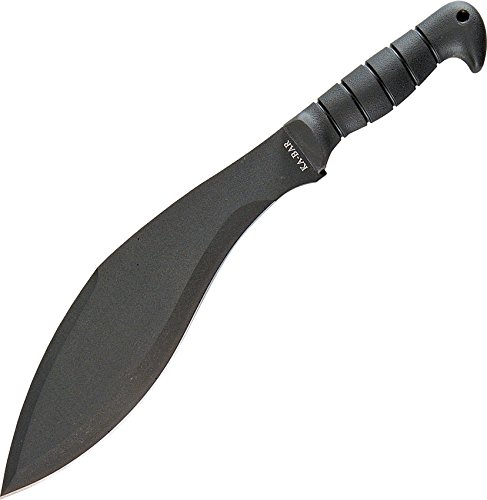 Starting off this list of 1085 steel reviews is the Ka-Bar 2-1249-9 Kukri Machete. It’s a specialty tool that’s large and heavy and generally needs some getting used to when maneuvering. This makes it an interesting addition to a lot of people’s knife collections.

An exciting detail about the Kukri machete is that it’s a general use tool even if it’s categorized as a specialty knife. It can either be used for agricultural and gardening purposes – for cutting grass and chopping small pieces of wood – but can also be used for combat. This makes it a very handy tool-slash-weapon. 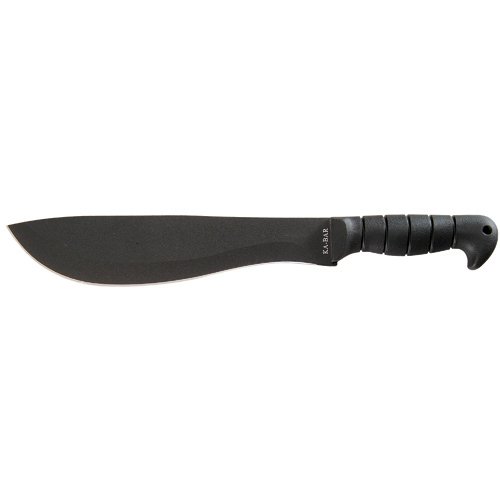 The Ka-Bar KA1248-BRK Machete Cutlass is another option to look into for those who are interested in a general purpose specialty knife. Unlike the Kukri mentioned above, this is a cutlass-type machete, offering a more curved blade.

Compared to the Kukri, the Cutlass is also slightly smaller and lighter. This makes its handling easier and more comfortable for some. Those who aren’t used to machete-style knives might find this easier to work with. 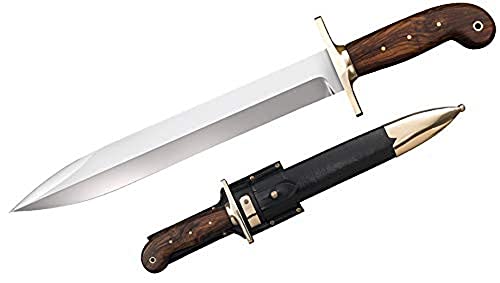 For something more manageable and usable for those who don’t explore the wild outdoors or need to take on backcountry jobs, check out the Cold Steel 1849 Rifleman’s Knife.

As its name suggests, it’s fashioned after the knives produced for the US Army in 1849. While it’s not an exact replica, it can still be a good choice for those who do historical re-enactments.

Performance-wise, it’s designed to be a solid knife. It can also handle some outdoorsy tasks and can get quite rugged. Just beware of imitations.

The 1085 steel may not be the most popular in its range but it’s still a very nice option for those looking into the 10xx series for a new addition to their collection. As mentioned in this 1085 carbon steel review, it’s tough and durable so it can be a solid option for knives that are intended to be used roughly.

Have additional information or details on the 1085 steel? Share them in the comments for others to know.